Wedge weave is woven on the diagonal, which produces it’s characteristic scalloped edge and offers great opportunity for bold design.

Since 1973, weaving has been Michael Rohde’s passion. Though he has lived in California for many years, some of us in Houston remember when Michael was once a member and president of CHH. In 2017 he returns to the Texas weaving family in a featured role at the biennial conference.

Michael’s passion for weaving spans 4 decades, and in 1999, he left a career in biochemistry to pursue weaving on a full time basis. The effort has paid off. His powerful rugs and tapestries have been exhibited all over the world, including as part of the State Department’s “Art in Embassies” project, and are found in the permanent collections of many major museums. 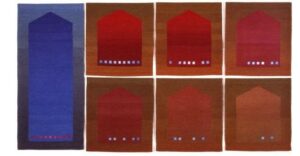 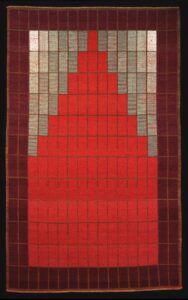 As part of our super lineup of guest speakers and teachers for the 2017 Biennial Conference, Michael will be offering a pre-conference workshop on Four Selvedge Wedge Weave. He will lead several conference seminars on design, creativity, and his world travels.

Among his travels, Michael has journeyed to the weavers of rural China, and among the nomadic peoples of Eastern Tibet, the latter of which inspired his “Houses for Nomads” series of tapestries.

Michael will also serve as the closing speaker. Even though we know we will be sad to leave behind our weaving experiences in Houston, we are looking forward to his weaving vision and  creative encouragement as our final thought for Conference 2017.

Read more about Michael, including how his weaving reflects his experiences traveling to many countries, on his website: